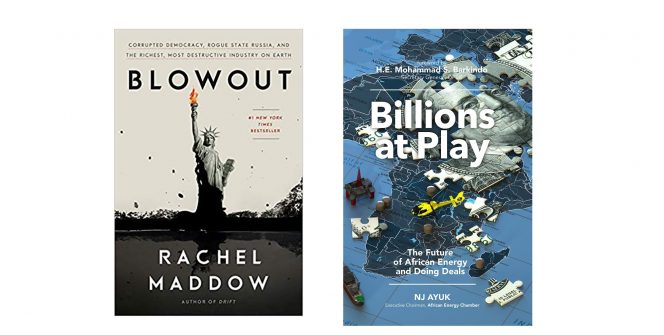 The Billions at Play and Blowout Giveaway!

Enter now to win these two best selling books. If you’re a political junkie, have concerns about our global future, the environment, energy, or want to learn more about oil, gas, and energy, then this book giveaway is for you. Win these timely books on oil and energy to be informed on the issues shaping our tomorrow. Enter below to win both books in hard cover, worth over $40!

A copy of Billions at Play: The Future of African Energy and Doing Deals by NJ Ayuk

A copy of Blowout by Rachel Maddow

A copy of Billions at Play: The Future of African Energy and Doing Deals by NJ Ayuk

Energy can and must work better for Africans and, in doing so, it can benefit other countries, especially the US. Billions at Play, The Future of African Energy and Doing Deals—the awaited follow up to NJ Ayuk’s Big Barrels, explains how.

African economies are undergoing a transformative period. The energy sector, in particular, holds great potential to revitalize the African economies. In a straightforward approach, the author outlines the fortunes and misfortunes of Africa’s petroleum industry and the lessons every nation can learn from to build competitive economies.

Ayuk expertly argues the case for increased female involvement in the petroleum sector, better governance, and more responsive national oil companies. He points the way to a more powerful African presence on the world stage through the African OPEC membership and energy value chain development and examines the US role in Africa’s growth.

As Mohammad Barkindo, the SecretaryGeneral of OPEC says in his foreword, Ayuk is a dreamer. But he is a dreamer with an action plan on how to turn energy into the driving force behind Africa’s growth. In this book, he gives Africans the tools to get more from the energy industry. He also answers some of the most burning questions of the day:

How did Africa get here, and what comes next?

How do African countries and societies get the most value from their resources?

What exactly can African leaders do to put their countries on a sustainable, profitable path? How can all parties win in Africa’s energy deals of the coming decades?

Building on the success of his first book Big Barrels: African Oil & Gas and the Quest for Prosperity, NJ Ayuk in Billions at Play: The Future of African Oil and Doing Deals offers his unique perspective on what it takes to build success in this complex business. Big Barrels gave you the African success stories. Billions at Play explains how energy can help achieve the African Dream.

In 2010, the words “earthquake swarm” entered the lexicon in Oklahoma. That same year, a trove of Michael Jackson memorabilia—including his iconic crystal-encrusted white glove—was sold at auction for over $1 million to a guy who was, officially, just the lowly forestry minister of the tiny nation of Equatorial Guinea. And in 2014, Ukrainian revolutionaries raided the palace of their ousted president and found a zoo of peacocks, gilded toilets, and a floating restaurant modeled after a Spanish galleon. Unlikely as it might seem, there is a thread connecting these events, and Rachel Maddow follows it to its crooked source: the unimaginably lucrative and equally corrupting oil and gas industry.

With her trademark black humor, Maddow takes us on a switchback journey around the globe, revealing the greed and incompetence of Big Oil and Gas along the way, and drawing a surprising conclusion about why the Russian government hacked the 2016 U.S. election. She deftly shows how Russia’s rich reserves of crude have, paradoxically, stunted its growth, forcing Putin to maintain his power by spreading Russia’s rot into its rivals, its neighbors, the West’s most important alliances, and the United States. Chevron, BP, and a host of other industry players get their star turn, most notably ExxonMobil and the deceptively well-behaved Rex Tillerson. The oil and gas industry has weakened democracies in developed and developing countries, fouled oceans and rivers, and propped up authoritarian thieves and killers. But being outraged at it is, according to Maddow, “like being indignant when a lion takes down and eats a gazelle. You can’t really blame the lion. It’s in her nature.”

Blowout is a call to contain the lion: to stop subsidizing the wealthiest businesses on earth, to fight for transparency, and to check the influence of the world’s most destructive industry and its enablers. The stakes have never been higher. As Maddow writes, “Democracy either wins this one or disappears.”

The Unseen Blade on Audible Giveaway